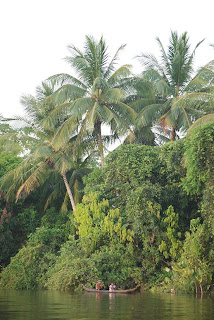 This is not paradise
As readers might have gathered by now I have been very impressed by my trip to Delta Amacuro.

As soon as I arrived in Maturin I realized that I was going to learn more than what I was looking for, starting with my taxi driver explaining to me how PDVSA was the real power in Monagas State (and thus Delta Amacuro which is shielded by Monagas). This indeed is an area that chavismo has completely taken over, where it is almost running on its own and where political battles are among chavista factions. Besides nature gazing I was going to see the bolivarian Frankenstein working unfettered.

Within a day of having reached Caño Manamo I had understood that official life was all full of great feelings, not so good intentions and continuous Venezuelan indolence. The best example to illustrate that is the Warao school I visited: a brand new and expensive school, teachers from afar, and yet the forced acquisition of Spanish sounding names. The price for the Waraos to taste civilization would be in the short term a loss of identity, something that could subject them to chavista officials for a generation at least.

I am not the one to judge whether the sacrifice to be made by the Waraos is worth. However I must start by writing that no matter how magnificent nature is, it is not paradise. It is a sodden place, where you must built everything on stilts, were bugs and humidity and rain and heat will always torment you and where you cannot get easily what would help you to make the best of it, such as electricity to make AC run or efficiently purify water. With such an unfavorable situation to start with any real and coherent progress should be easily seen. It is not. What we see is yet another area of devil-may-care which is tempered by the harsh reality of the place which forces genuine collaboration among the people and a minimum of organization to survive.

The bolivarian revolution is not the solution for the Delta as the social programs I observed are useless to ensure long term survival of the culture, or even the permanence of the people (Caracas streets have been plagued for years now by Waraos as homeless folks). Since there is no question, at least for the time being, of transforming the delta in a rice breadbasket for the world, then social organization is useless as it cannot improve on the one formed over the centuries by the locals as they adapted to the place. It is not by coming and changing the architecture, the names, the needs, that things will get better. It is the same sad story all over again, where the natives are overwhelmed.

I would guess that only rampant capitalism through private initiative could change and improve the area, as long as it is the Waraos that become the new business people of the area. Besides the obvious health and education social programs, all the governmental actions should go to simple points: favor individual fisheries, favor individual catering to tourist willing to pay hard cash, organize a better production and distribution artisan system, protect and pay people to protect as much as possible of the delta. And preserve the Warao culture, make it a sort of bilingual area, truly.

Let's face it: the only possible source of hard cash in the Delta area is any oil that could still be found and tourists willing to pay for what can only be an expensive proposal. But the bolivarian mindset is unable to get that point, as we can hear form all the empty slogans of "democratizing" tourism, and making sure that all can "participate". The reality of the delta is the Occam's razor of such a system. Putting up lots of political billboards or changing the names of the kids is not going to change the reality of the delta. The type of tourists that go there is the hardy type, the one that is willing to pay big bucks and put up with significant discomfort in order to observe the wonders of nature. The bolivarian masses? Well, let's not be coy with words: most of these masses are more interested in hanging out at beaches or A.C. malls, Sambil style, than fighting bugs and spending hours sitting under the sun on a boat to get to see a few exotic birds.

But I suppose we cannot help it, Venezuelans have never been too much into that type of tourism and are even less able to understand it. The planes are full towards Miami and ten years of chavismo have not changed that. One night talking to my guide I asked him which were the more interesting tourists, or at least the most interested ones. He thought about it very little and said that the Germans were the best ones. The French tended to be a little bit more adventurous but the Germans were the ones that cared the most about all what they saw. I had to ask which where the worst ones. This time my native guide looked around to make sure no one would hear his reply. Then he leaned toward me "The Venezuelans: they only want to party and drink beer".

Thus I should not be surprised about all what I saw.

There is clearly no long term plan, no solid structure to trey to get the best of the area. Even at Pedernales which should be a well furnished base camp for excursions, you had trouble for running water. Tucupita and Caño Manamo have suffered from the dike crossing the Caño and so far, even though salinization is advancing fast, there is no talk of letting more Orinoco water spill to Manamo. There is not even regular flights to Tucupita, something that would be easy for the state to subsidize to attract more Venezuelan tourists that would content themselves with a visit at Tucupita and some local boating for a jungle experience. Instead the locals are offered motor boats and cheap gasoline whose ecological damage will appear sooner than later as the local river mammals numbers surely are starting to fall. Is there any agency monitoring them? The government could have started from the right foot by creating a river commuting system of sorts, but that would have required work and organization and commitment. Thus wild anarchy is paradoxically preferred on this respect!

I think that the Delta is still protected by its sheer size, even if burning land for ranches is advancing fast in the upper areas. But the danger to the Delta is clear and it is not necessarily at the Delta itself. Deforestation in the Andes, increasing pollution from the the growing population of the Orinoco and its tributaries are very likely to make their effect felt sooner than later. Right now the the real threat is for the Waraos to decide to chose a life of misery on the dry land as they realize that their original habitat cannot provide for them with the expectations that modernity offers them. Watching Direct TV on a sodden stilt house must have an effect when the government offers you mostly slogans and free aspirin.

The trip
From Monagas to Caño Manamo
Nature wonders
The Waraos: integration, acculturation, domination or extinction?
Pedernales, or the limit of a revolution.