There has been a small scandal of sorts lately. Leopoldo Lopez, the Chacao Mayor running for Caracas Mayor at large went to the U.S. to explain to whomever would listen why the Russian/ruffian list was unconstitutional and strictly designed to bar him from winning the Caracas office (affecting a few other folks, but I am simplifying). Indeed all serious pollsters coincide for once: if elections were held tomorrow in Caracas, Leopoldo could be sworn in the next day.

There was also another small scandal when Leo came back to Venezuela as to how badly he was harassed at the airport by dumb security officers. No one should be surprised, sycophantic chavistas have learned long ago how to pick up the political line du jour and try to score brownie points with El Mucho Macho Supremo (Mucho Macho coming from a devoted reader of this blog). Last week we had such an undignified example when the National Assembly changed all its schedule on important law making to follow on Chavez cue and congratulate Russian, calling the folks on the list "ladrones", thieves, even though their only crime was to use some money destined to pay, say, street repairs, to pay wages because Chavez increased them by 30% suddenly.

But of course, anyone that does not support unconditionally Chavez is attributed all sins, including having breakfast with roasted chavista children. 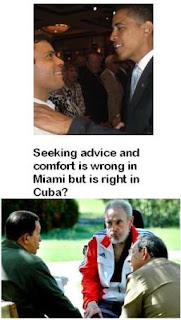 These sad episodes, including Leopoldo pleading over at Obama who has yet to be elected president and who will have more pressing issues once at the White House, made me consider again how immature Venezuelan politics have become. The National Assembly unworthy display of last Wednesday is just another example on how all of our political class is now mostly a bunch of drama queens, an appropriate comparison today as it is Gay Pride around the world and some of the parade screaming queens have way more credibility and decorum than people like Carlos Escarra, Barreto, or even Leopoldo on his bad days. But then again the example for the whole country these past 10 years has been Chavez drama queen tantrums, sometimes in a variety of costumes and from the most diverse locales. Perhaps a little leather drag, harness and chaps would make Chavez more convincing when he threatens us?

I was wondering aloud what was worse, for Leopoldo going to seek Obama and look all starry eyed at him from down below (Leo is very short) or Chavez going to Cuba, again, to seek, again, advice and comfort from old senile Castro (who he looks at as starry eyed as Leopoldo did gaze Obama). Yes, why is it that all our leaders must go overseas to solve their problems? How come Chavez cannot understand that the Castro's model has failed and that they use him to solve THEIR problems? How come so many in the Venezuelan opposition are waiting for the Marines to land and solve their problems, because they are too lazy to do something about it, not having time to march, to protest, to vote, to monitor polling stations, to etc...?

In all fairness I think that Leopoldo Lopez is way more aware than Chavez that the solution to his problems lies inside Venezuela. Yet this cannot excuse him from doing such a PDA towards Obama. At least we will get something out of this: Chavez will not be able now to use the fact that Obama is not white for his own political advantage: black or white, serious and skilled US politicians know Chavez is a creep.

However if the opposition is slightly more clear eyed than chavismo as to what they can get outside Venezuela, they have a knack at killing their own when they dare to try to do something positive for the cause, even if somewhat ill conceived. The biggest example of self destruction is of course the abstention movement created to abstain from voting without any alternate strategy or goals. Action and emotional reaction, for ten years Chavez has been playing us looking as a skilled strategist which he is not: his victories are due more to opposition errors and his fat check book than any real Machiavellian planning from his part. Doubt it? Then wonder come that after 10 years he still does not feel secure in power and he still resorts to infantile "us against them" strategy?

In fact no matter where we look from, political leaders are primitive, infantile and/or uncouth. With the few worthy exceptions such as Teodoro Petkoff (though his own failings barred him form ultimate success) we are all showmen, all seeking the immediate and easy solution, just like young kids. Chavistas prefer sycophancy and follow the leader with a hefty dose of violence to settle issues. Opposition followers use the now it's my turn and the mine-mine coupled to my Daddy is stronger than yours.

But this would be merely amusing if it were not made lethal when double standards are brought into play to confuse everything and transform childish poses into primitive warfare. This blog is 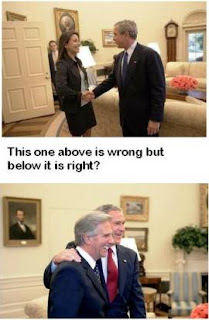 made of the use and abuse of double standards by Chavez and chavismo to divide and conquer. The Russian list is just the latest avatar. But the opposition is far from being exempt. I should recall two famous visits to the White House held by Bush-Devil: one was Maria Corina Machado, the SUMATE leader and the other one by Tabare Vasquez, the left wing president of Uruguay.

When Maria Corina got to the White House of course chavismo got on such a great counter propaganda bonus. But Maria Corina was seriously criticized at home by some folks from her camp, including Milagros Socorro, a voice of conscience around here. These critics either confused Bush and the US (the interests of a State with the interests of an individual) or simply were jealous that she was received and they were not. Maria Corina is, contrary to most of her critics (vocal or not) someone who acted and who tried to do something to end our nightmare. But panning her success was necessary least she would become a Venezuelan political leader, something that could not be allowed by some. The fact of the matter is that since that fateful visit her star started to dim and today she is relegated to a rare back page tidbit of news. If Milagros Socorro was right to limit her criticism to poor timing and manners for Maria Corina, too many folks were only to glad to make Milagros the fall girl on their wish to remove Maria Corina from the front scene, chavistas and anti chavista alike.

The counter example would be the visit of an all smiles Tabare at the White House, followed by a return visit by Bush to Uruguay. Tabare Vasquez does not confuse the state interests of Uruguay and the US with the provisional holder of the presidential mansion. And yet where are the cries of outrage from either chavismo or opposition? I am pretty sure that Milagros Socorro did condemn that visit but after all the flack she took from those who will not hit with a rose petal an opposition leader, she probably did not contemplate writing another OpEd piece, even though such an article was badly needed to rub the vent into the face of chavismo!

The problem is not that we do the necessary criticism to Leopoldo or Maria Corina, is that we expect too much of them. The problem for chavistas is not the opposition criticisms, it is that too many of them see Chavez as a Messiah, and that even more of them see our criticism as a threat to their continued looting of the state. As long as a society we keep following the lead of Chavez and refuse to differentiate criticism from insult we will remain mired in our mediocrity.

I think that we have not learned our lessons from the school yard, pretending that we are still there at play...