What Venezuelans want, sort of 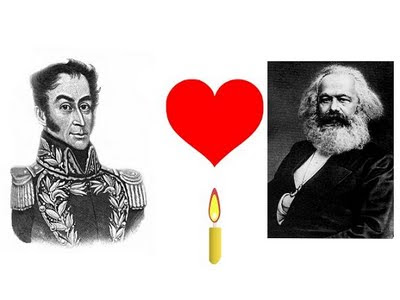 
Left, centre and right or love

Some weeks ago Venezuelan pollster Keller published a new report about the current political climate in Venezuela. Although I found the rural areas were again underrepresented, I think the results do reflect more or less reality in the Land of Grace.

You can see a Power Point in Spanish here.

Here you see a graph I created with their numbers on general political affitiation: 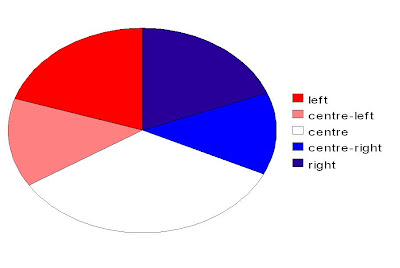 20% considered themselves left, 14% centre-left, 34% centre, 13% centre-right and 19% right. You should take those numbers with a pinch of salt or two or three or rather sit down, take a breath, relax. Left-right and centre are relative concepts everywhere, but more so in Venezuela. The level of "ideological"/political discourse is more superficial than in many other places. If you speak Spanish, you can listen here to a very telling interview by Globovisión journalist Angola and chavista deputy Iris Varela. "Do you believe in Marx?" "I believe in Simón Bolívar"...and then they go into talking about love and the president. The comments are even more depressing. Really: vergüenza ajena.

A curious thing is that if there were presidential elections today, 44% would vote for "anyone other than Chávez" and 33% would vote for the current president. Hugo's popularity has been falling for some time already but this is really a lot.

When people were asked to say what the opposition should consider as priority, 58% said they had to bring forth proposals for the country, 16% said they should select their candidates and 13% said they should establish a strategy (for campaigning).

I have often read in comments that nibs want "chavismo without Chávez". The thing is: what does that mean? Venezuelans want more of the social programmes and the goodies they always see with oil booms, but they often are not fully aware of how dependent the country is on oil prices and how low the general productivity is. They are more and more tired of the president's rants. Above all they are tired of increasing poverty, crime. They are also aware education in Venezuela sucks...but I have to say they have no idea about how badly it sucks (check my posts with the label "education").

Last but not least, Keller found out the largest group of people who see themselves as independent have taken that path because...they do not want to get into trouble/are afraid.

The regime has clearly lost its popularity, although it keeps that hard-core group composed of the middle-to-high-ranking chavista officials and the largest political group of the very poorest, but this group is no longer a majority. The numbers of nibs has increased a lot. Still, the opposition has not been able to capitalize on this. I know we have difficulties: chavismo's permanent attacks, a missing state of law, lack of funds and so on. The opposition has tried to do a good work in regions such as Miranda, although a lot of its work has been under attack by the regime. Still, we could and should be doing more.

I find it a tragedy that most part of the political talk by the opposition in the media is carried out by English-speaking students who come from private schools and chant "freedom, freedom" in posh shopping centres and opposition leaders who belong to the Paleolithic and with few exceptions have a discourse that is as superficial as that of the students. They are not the majority among the people who dislike Hugo but they have taken the central stage in the media. Hardly anyone has presented ideas for sustainable development, education for the poor, health or security. Primero Justicia has made some good proposals, but they seem to keep them most of the time as hidden as if they were a secret to be patented. Never mind the government has not presented a real development programme either* during the decade it has been in power: it has the petrodollars, the control of the electoral commission and the TV channels that reach every corner. The opposition doesn't, it cannot afford to act as it does now. It needs to spread the ideas, distribute flyers in the bus stations poor Venezuelans use to to to their villages, talk to the people in the slums.